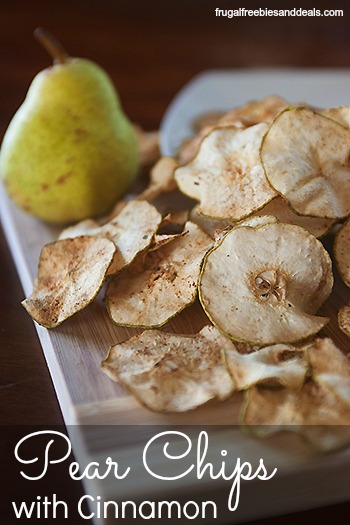 I love making fruit and vegetable chips and it seems that you guys like them, too!

The most popular post on FFD is my Salt and Pepper Zucchini Chips recipe (it has over 100,000 Pins on Pinterest) and you all liked the Crispy Cucumber Chips recipe, too (it has 7000 pins).  I think what it really tells me is that a lot of people are looking for healthy chips.  It’s nice to have chips you can eat without feeling guilty AT ALL.. in fact these chips are SUPER good for you!

I have another zucchini chip recipe in mind I am going to put together as soon as a catch some on sale, so look out for those.  But for now I recently snagged a bunch of pears on sale for 4 pounds for $1, so I decided to make some Pear Chips with them.  These are basically just dried pear, sliced very thinly on my trusty mandoline slicer on the thinnest setting.  I added cinnamon because not only it is tasty is super healthy.

You can do these in the oven instead of a dehydrator .  Here are directions for that.

I dried mine for about 4 hours and they are still chewy, your could go longer and see if they crisp up more.  In the comments let me know if you have any other healthy chips you would like for me to try!!

On to the Pear Chips Recipe:

Save Recipe
Print Recipe
My Recipes My Lists My Calendar